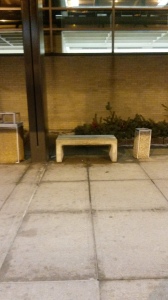 “Why aren’t you smoking?” He said. “You’re always smoking.”

“I’m quitting,” I said and chomped on the nicotine gum harder. As always, I knew this was coming. That He was coming. He always does.

“No, I’m quitting. Trying to quit means you might not get there. I’m gonna get there.”

“Can’t say I’m surprised,” He said and drank. “I figured you for the easy way a long time ago.”

I was incredulous. “Easy? You think quitting is going to be easy?”

“Relatively,” He said. “Quitting is something you have control over. It’ll be a bitch, but you’ll probably do it. And I figure when you do, you can point to all the other stuff you have been and continue to fail at and you’ll cry out ‘But I quit smoking!’” He mock yelled in a screechy falsetto. “Everyone will pat you on the back like a fucking toddler when they go potty in the toilet the first time. And they’ll glance at each other knowingly. Pat the big guy on the head, they’ll think. Gotta make him feel good about something.”

I turned and looked Him in the eyes. “And what about getting the piano. And finally writing Empty Calories. And not resting until I find a job that will go somewhere. What about all that?”

In a rare moment of solemnity, He put down the bottle and turned to me, returning my stare. This was odd for Him. He usually dismissed anything I had to say with a drink and shrug.

“I’ll tell you about all that,” He said and closed in on me. “Trying the piano again and going full force with the job hunt and your little memoir. You took on all of it because of fear.”

“Fear?” I raised my eyebrows and shook my head once. “Did you say fear?”

“Indeed I did,” He said and pulled from the bottle. He winced, then swallowed. “You are so afraid of failing at anything, you’re taking on so much that when you do fail, everyone will say ‘Well, he gave it his best shot. Kudos to him for trying.’ But you’ll know why you did all of it. Shuck and jive, baby. Stick and move. Try everything so it’s no surprise when you fail at all of it,” His lips curled back into a snarl. “If I were a disappointment, I’d probably try a little 3-Card Monty myself.”

“I’m not a dissappointment,” I said and grabbed the bag away from Him. “People are proud of what I’m trying to do with my life.”

“Ehh, not really. They just tell you that to make you feel better about a being a dud,” His grin had returned and He stood up. He walked to the curb and looked down one way, then the other. He turned back, walked right up to me and stood over me. “It’s like that woman you were dating, or whatever you want to call it. She was the one person who knew you needed to man-up and stop being so goddamn sensitive. And she makes one callous remark and you hang up on her. Nice work, that one.”

“There were a lot more issues there than just me being too sensitive, okay? There was –“

“Shut up,” He said. “It doesn’t matter now. She won’t talk to you anyway. Granted, she took the coward’s way out and “ghosted” you. And you did take the high road and write her the letter apologizing for what you did because she gave you no other choice. I’ll give you that. But she obviously wants nothing to do with you. I mean, let’s be honest, you should just see the writing on the wall and pick up the phone the next time you’re ex calls you. And she will call you again. Or you can keep asking out the smart, beautiful, funny ones and keep getting shot down. How many did that last one make? Was it 4 or 5?” He sat down next to me and slapped my knee. “You might charm your way into some other woman’s heart, but let’s be honest. At your age, no woman wants the sensitive artist poet pianist Sally douchebag. They want someone who knows he has a pair. You can’t even find your pair. Any woman who goes with you is gonna realize pretty damn quick that you have limited earning potential, intelligence, wherewithal and balls.”

I took a deep breath and tried to feign indifference to all things He was saying, I had gotten out my smartphone and was flipping through my friend’s website. Noticing this, He snatched the phone from my hands and looked at it.

“See, that’s exactly what I’m talking about,” He said and chuckled. “Your old editor’s got her book out. She is doing something great. Those Andy Andrews and Og Mandino books you are listening to? You can get all the inspiration you want from them. The difference is the average guy those books apply to? They don’t have brain damage. You do. You’re so jacked up in the head you can’t master new skills, let alone resurrect old ones. Trying to forge those severed neurons by playing piano again. Come on guy! It ain’t gonna work. The fact is what your editor said is right. It took her having kids to realize that she needed to stop screwing around and do something great and she did it. And she has the writing accolades and a great web site to back it up. All you got is 8 years of being a drunk and a WordPress blog.” He stifled a chuckle. “And here’s the thing you need to remember. You can’t undo having kids. But with you? Please. You’re damaged goods. You sent out that email all gung-ho about getting on with your life and finding a good job and what do your friends and family come back with? Menial labor and sacking groceries, that’s what. All it takes is a few more visits from me and I’ll say just the right thing and out the door you’re gonna go. As your man said, you’re just one drink away. Come on sport,” He said and put His hand on my shoulder. “You are terrified that you are a lost cause and all you will ever be is a wheelchair pusher and an alcoholic. I say get it over with and start acting like one.”

One thought on “Him (Fear)”