A Facebook Friend recently posted a photo of her darling little dog (by the way, I am coming to dislike the term Facebook Friend. While accurate, it just somehow seems so impersonal, though a FB friend she is. And as I always say, it is what it is) after a dental extraction. I really sound very clinical when I say “dental extraction.” It sounds a lot more technical and medical than “the dog had another tooth yanked,” which is what happened. But the way I say it makes me think that those tuition dollars Mom and Da ponied up for half a semester of veterinary technician schooling wasn’t all for naught. Kathy posted a picture of Rafael and he only had 4 teeth left. Four. And while I don’t recall from my vet tech schooling how many teeth dogs start out with (I failed that exam, among many others. Stupid brain damage), I know it’s probably a good many more than 4.

Which got me to thinking (always a dangerous, if not amusing prospect), and I came up with one of my million-dollar ideas. I’ve had 3 so far, the explanations of which I’ve posted on this blog and I’m shocked that no one has run with them and thus deprived me of millions of dollars in royalties or at least a few grand in naming rights. But the specifics of this idea definitely lend themselves to some thoughtful consideration.

If you are a dog, you are by nature a carnivore. That’s why so many dog foods attempt to recreate the flavor if not the actual substance of lamb and chicken and beef and the like. Another FB friend of mine has been having issues with her dog’s vomiting and watery stool and I comforted her by saying The Dude probably just ingested something funky while she wasn’t looking. Because as most dog owners will testify, a great many dogs have a strange taste for things that we as humans are left shaking our heads and wondering what would possibly make motor oil or anti-freeze or an old shoe sound enticing. I don’t know if eating a leather couch or a box of nails is what ultimately lead to the rapid deterioration of Tucker (The Dude) or Rafael’s dental health, but I have come up with a solution. 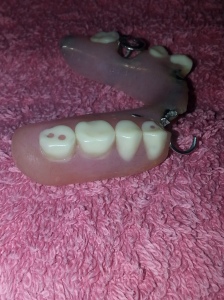 Doggie dentures. Let’s dispense with the “I could never sit my dog down long enough to get them in” or “They would just come loose” or “What person in their right mind would use a product like that. Feed the dog scrambled eggs the rest of his life and call it good.” I know a few people that probably have had thought like this but honestly, I love food too much to have pride about how I chew it. If I had to glue broken glass to my gums in order to enjoy Blue Diamond Smokehouse almonds I’d do it in a heartbeat. And I know dogs that feel that exact same way. I used to work for a dog boarding place that had some rotund clients who never missed a meal and their owners never missed giving it. Sadly, dogs can also be extremely obese and contract diabetes but that doesn’t keep them from the Beggin’ Strips if they can get at them. Besides, most dogs are smart enough to know through trial-and-error that if they sit still long enough for the owner to put in their teeth, there’s definitely some steak to go with the eggs on the horizon.

Addressing the question of doggie dentures having a precarious hold on the gums, I assume great strides have been made in adhesives over the years that the habit of having to constantly work ones lips and tongue in order to keep them in place doesn’t happen anymore. I personally haven’t seen it since this substitute teacher we had in fourth grade used to do it all the time. The mockery she received because of it is probably one of the reasons she didn’t sub at my grade school for very long (I went to grade school with some bonafide jerkweeds.) Although it would be wicked funny to watch a Chihuahua or Bichon Frise walk around smacking their gums all the time like Ms. Patterson.

And as far as the question of variety of diet, do you seriously want to relegate your dog to a constant intake of scrambled eggs or oatmeal or wheat paste the rest of its life? Smell is one of the dog’s primary senses, way beyond sight. That’s why millions of dollars are invested in making dog food smell good even if it has the consistency of chewed bubble gum mixed with chalk. So I say grab the tooth glue and lock and load.  take the dog to the vet and get him fitted for some phony choppers.  Your dog will eventually thank you, even if they do greet you initially with my K-Man’s patented “Are you freakin’ serious” stare.

One thought on “Million-Dollar Idea, Pt. 4”